Designers: What drew you to pattern making or design?

For me, it was frustration at modern pattern writing. I learned to knit from my grandmother, who in turn learned to knit in the 1930’s. My technique is just no longer taught, and no longer written for. Added to the frustration was that I felt like every pattern written now can only be worked in the yarn suggested or you will never reach gauge. I have ripped out or tossed out at least ten times as many projects as I have finished. Then one day a stranger came to the knitting group I was a member of and asked if someone could match an old Christmas stocking her mother had knitted from a kit that is no longer available. She had a box containing at least a dozen fails and the original. After taking it home and figuring out how it was constructed, I was able to reverse-engineer the stocking and create a whole new pattern set for future use.
I was hooked.
I don’t really design patterns as much as I rewrite patterns. I like to recreate vintage patterns, or boil patterns down to an easier math equation so they can be worked in either more sizes or more gauges.

What a wonderful gift you have!!

So sorry for the late response; it got lost in my notifs.

We all start somewhere, right?!

Life gets a little easier with the help of others who know what they’re doing or can guide you there. I remember how awestruck I was when I realized ravelry was a thing and then just how many patterns were available on etsy and most currently the ribblr revelation.

I am so guilty of the same scrolling, LOL, but look how that decision ended up paying off for you!

I’m glad your community is getting the chance to celebrate it again. It will be extra special this year, no doubt.

And anytime! Best of luck to you setting that all up!

I didn’t realize the conventions had changed so much, and it’s always sad to hear when that sort of knowledge and know how is becoming lost; but, what a special gift your grandmother gave you, and how beautiful that this method and her teachings now live on through you.

I can see how a dearth of flexible patterns would be vexing, especially because one of the great things about fiber craft (I feel) is its versatility, adaptability, and the great variety that can be achieved by changing any of its elements. I’m sorry you’ve had such a bad go of it with patterns.

How fortuitous that person ended up at your knitting group, though! I’m always impressed how people can reverse-engineer those sorts of things, and it is awesome you were able to make a new set from it. It seems like the stocking/pattern was of some sentimental value, as well, so I imagine that made the experience all the sweeter.

I find it unbelievably cool that you work with vintage patterns and improving access to others. Your efforts definitely qualify in my book, and I’m positive people appreciate your hard work!

I participated in a shawl kal and won a mini skein gradient set of purple heavy lace weight 80% merino/20% silk yarn. The yarn is very soft and so squishy! It was absolutely the best prize ever!!

I wanted to make a slip over top that I could wear year round. All the patterns I found used more yarn that I had, so I became a very reluctant designer.

I decided to use Naomi Parkhurst’s Friendship pattern as the main pattern for this top because it was one of the patterns in the shawl I knit for the kal and for all the friendships I made along the way.

I finally finished it and it turned out awesome!! 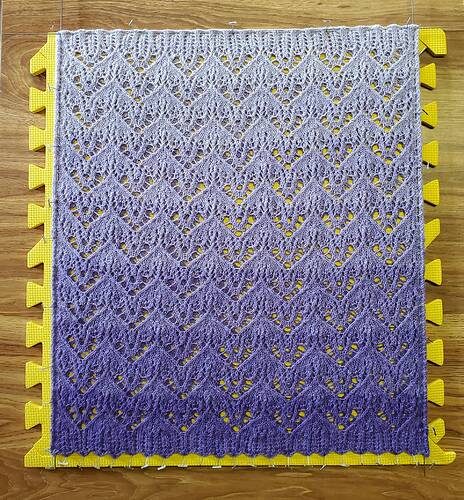 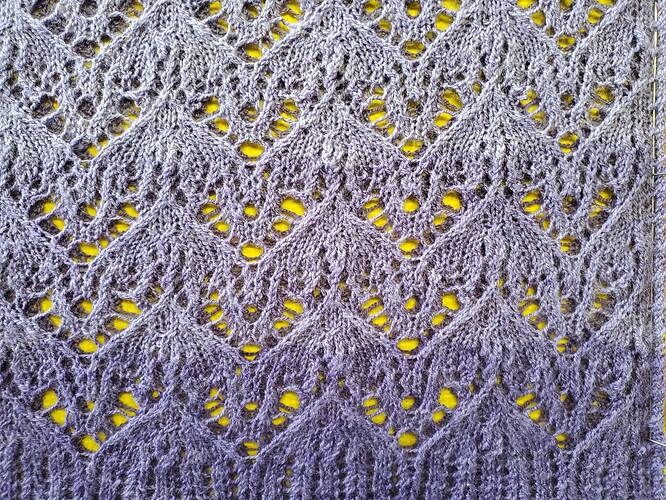 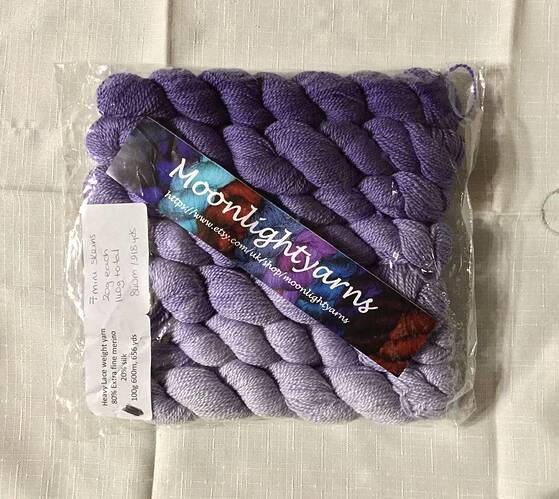 That yarn looks heavenly! So so pretty! I can see why you wanted to use it up ^.^

That choice is such a sweet dedication to your experience in the KAL.

And what a gorgeous stitch pattern, it looks like moth/butterfly wings almost!

A stunning piece, and the gradient just adds a whole other dimensions! I hope there is more designing in your future; clearly you’ve got a knack for it, no matter how reluctantly you came to it.

Honestly I get bored and just play around with things and sometimes its decent so i make notes, and recently I realized oh I can put it out into the world.

That’s awesome, though! Wish my boredome was that constructive!

It’s really a great idea to take notes, just in case there ends up being potential later. I’m glad you’ve started to share your designs with the world, and I’m keen to see more from you, especially given how cute (and helpful) Olie is!

You are so clever!!! People recognise painters sculptors etc as some of those clever artistic people and fibre artists don’t get any praise ( They are still really clever and so talented but the fact that someone could have a career in Fine art easily and have the ability to study it in a Uni/college but the fact that it is so hard to have a career in fibre art really annoys me sometimes). Anyways this is amazing and so beautiful.

I’d say my experience was wanting to make something and realizing that the pattern I wanted either didn’t exist or didn’t look the way I hoped it would. Sometimes I’m just having fun!

My first pattern was Kiala the Kitsune, which I have yet to convert to Ribblr form. For being my first pattern, it was also my most intensive one.

Thank you so much!!

You have a very good eye! This is the designer’s quote, “ I like the way it looks as if there are moths (the nice kind) or butterflies in the pattern.”
All the swatching, weighing, and calculating how many square inches I would get actually worked out perfectly (I am still shocked that it did work!) It ended up the size that I thought would.

I had 0.7g of yarn left. Now I have to decide if I will write a pattern for it.

You are so clever!!!

I thought of myself as desperate, but clever sounds so much better!

fibre artists don’t get any praise

That is so true, they are almost completely unknown outside the fibre arts.