meme of the day!! 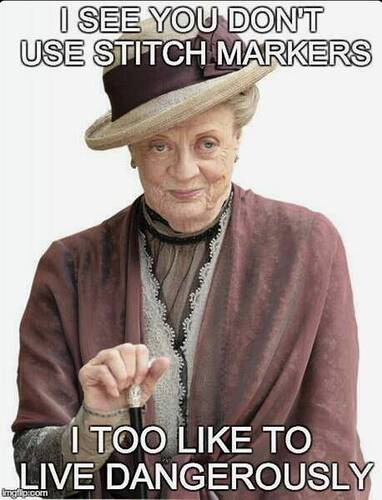 Oh hell no lol. Before I knew they existed things were hairy. We don’t speak of those times.

Sometimes for smaller amigurumi pieces I don’t use them

LOL OMG NO. I would die without my stitch markers.

I do tend to lose them, so I ended up learning how to make my own stitch markers.

no clue where they went, but also just ordered some stitch markers with like the clips similar to necklaces (because the other stitch markers are such a bother to move)

Like if I use stitch marker in project it’s usually just a piece of thread to easily mark, but those plastic ones I just use so my project doesn’t unravel if I take breaks, like using those plastic ones I’d spend just as much time moving the marker as working the full round

Yes! The plastic ones are the worst and as hard as they can be to move, sometimes they also fall off.

I make mine with the lobster clasps. Soo much easier to move. It takes like 5 seconds.

like just a bunch of those and some charms