Non crochet related - A kitty to brighten your day

Hi hi! I wanted to share this photo with someone cause I got my cat this terrifying duck bed and he finally slept in it today

I hope it makes you smile! 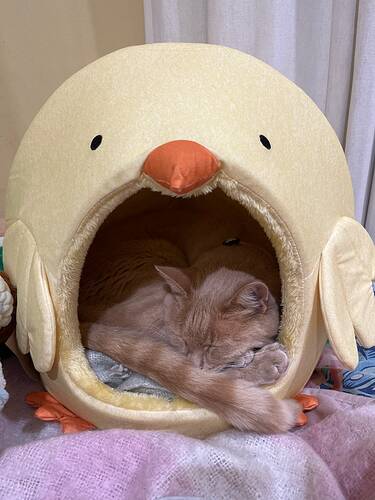 I don’t know how to create a poll but i betcha most of us prefer cats as pets.

That is super cute! and funny

I don’t know how to create a poll

I believe @ribbot can help you with that! There’s a guided tutorial the bot can run through with you to teach you a bunch of the features!

Hi! To find out what I can do, say @ribbot display help.

Aha! Cats are amazing crochet buddies I feel! My cat (the one in the duck bed) Riddick can’t help but unravel rogue balls of yarn when he sees them

@anoswaldoddity Hey here is the poll!

I have cats now and they’re adorable. I love all kinds of animals. I voted “other” because my favorite was a wild caught Amazon Parrot who chose me as his mate. We had 10 yrs together and I still miss him so much. He was like having a permanent 3 yr old but so worth it.

love cats, but can’t have them,

I’m allergic, that was why I chose ferrets, they are like kittens that never grow up. ;). Not allergic to them, they don’t carry the protein in their saliva and skin that I’m allergic too. Love dogs to, but they aren’t permitted at my apt.

Ferrets are so much fun!

I majored in animal science in high school. Always wanted to be a wildlife veterinarian but life got in the way.

That would have been fun! I call ferrets pure joy in a fur coat. I finally quit having them as pets after over 20 years because It was too hard to deal with their losses.

It was interesting. The looks I got at my kids pediatrician’s office when they asked about pets was hilarious. Apparently, 3 dogs, (roughly) 14 cats, 6 chickens, 2 ferrets and a bunny wasn’t normal. Lol

We lived on a 772 acre farm at the time. One house cat, the rest (approximately 13) were feral. I got a 40 pound bag of cat food every week, ripped a strip down the center of it and placed it up high on a shelf in the packing shed. During the day, I gave them canned food. (It’s safe to assume that I was feeding the raccoons and opossums too with that dry food since it was out in the open.)

One of the dogs wasn’t ours. I was dog sitting for a friend of my Stepdad’s for about 6 months.

The ferrets were Hercules and Xena. Adorable little bundles of inquisitive fur.

. They are expensive little critters to own. I had a ferret shelter for about 5 years and quit taking them in when I hit 22 ferrets. Most were pets people didn’t want after they realized how much time and money were required to keep them :(. Some I took in with medical conditions or temperament issues, but all were wonderful.

Our first ferret … Frankie (my ex’s brother-in-law’s ferret that we inherited when he moved out) turned out to be female and a biter. She only bit me and not my ex but he did hit her pretty hard for biting him once and she never did it again. I tried everything to get her to stop biting me (not hitting), nothing worked. I was standing there doing dishes, he’d let her out and she’d run right over to me and bite my feet. I finally had to tell him that she had to go. She went to a woman who had several and was ok with her being a biter.

Most of the bitters I had were either deaf or had not been nip trained. What color was Frankie?