Edit: solved.
This is a ribblr feature not a bug or glitch.
Ribblr confirmed the tab will not appear if you are not testing anything.
Thanks so much for all the help everyone.
This community is so super helpful

Hey,
Hoping someone can help with a little question.
Do you automatically lose acces to a pattern you tested when the testing finishes?
I have tested a few patterns on here but went to look at one of the pattern to notice I don’t even have a testing tab (I presume due to not actively testing any patterns currently).
Just looking for some confirmation on how this side works.
Thanks

We’re they there before the last Ribblr update?

Everyone has a testing “button”. Does yours look like this? In the middle at the top?

I agree with @anoswaldoddity you should have a testing tab even if you don’t have active tests… Maybe @Ribblr can help with this?

But to answer a little further on your question
If the designer removes it from your testing, then you would not see it there. Most designers have offered the final pattern as “compensation” for testing, so sometimes they will then gift the pattern after removing you as a tester, in this case it would be found in your “my patterns” tab… (However I have yet to have a designer removes me from testing and gift the pattern to me, so if I want to make it again, I have to go into my testing tab 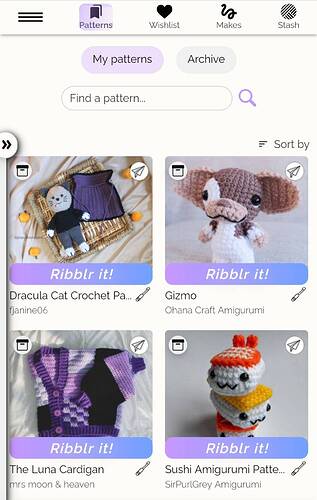 I used it about a week ago but now it looks like this.
Hopefully its just a minor glitch then. Thank you

I believe that might be a glitch, @Ribblr should know and be able to fix it for sure though

That is a glitch!

Agree with all the above. Hopefully you got a hold of @Ribblr help and can get you test tan restored.

As far as the patterns in testing, when the test due date hits I remove all testers from testing (otherwise the list becomes to cluttered) and those who have created a journal and/or given me any feedback, I will gift the pattern. If someone does not communicate with me after being added to testers then they are just removed at the due date time.

Clearly I haven’t tested for you

I so appreciate this step, btw!
I have about 12 +/- tests that have been completed, and designers haven’t removed them. It is pretty cluttered. I like to just see what I need to work on and get right to it. So, thank you for that!

@GotenkslovesmeCraft I agree basically with what everyone else has already said. Looks like a glitch. Your test patterns should not just disappear once you’re done, unless the designer has removed it

Just to check- how many patterns did you have under testing?

mine looks like yours when I am not testing. it happens when the person I am testing has gifted me the pattern for testing. So if you didn’t finish the test the designer may have just closed the test out?

hi! so, i got added to like a CAL but i can’t seem to see it and i don’t have a testing button. any way to fix this? thanks!

Someone else actually has a problem like this, here’s the thread

Hey, Hoping someone can help with a little question. Do you automatically lose acces to a pattern you tested when the testing finishes? I have tested a few patterns on here but went to look at one of the pattern to notice I don’t even have a testing tab (I presume due to not actively testing any patterns currently). Just looking for some confirmation on how this side works. Thanks

I believe there might be some answers there that could help, but @Ribblr should also know for sure though I believe it’s a glitch but I could be wrong

also, did you check your patterns to see if they just added it there?

Wow, there are actually several posts about this now… And folks are starting to say they can’t assign testers either

Weirdly, I can still assign my own, just no “testing” tab

I checked. None have ever been sent to me from any of the designers.