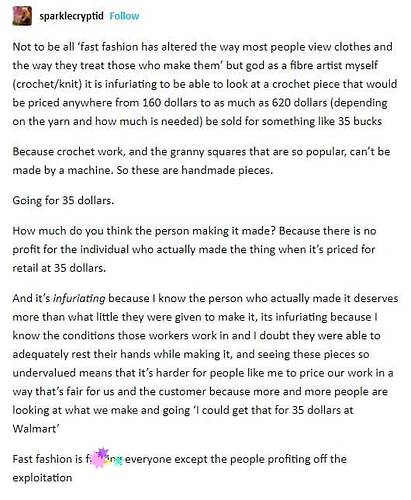 Yes. Just yes, so much this. shein pay as little as 1cent per garment to workers. Can you imagine being the person who has to churn out granny squares all day for 1 cent? There would be no joy in it

I hate this so much!
When i first saw an article some shein bullshit to nie nie we treat our workers well and pay them well and then the next thing is another article “underpaid shein workers” or whatever the title i was like what??
So i looked into it and found videos and more articles and people who worked there saying stuff and i saw red specifically for this reason.
Even if it’s hard for us to price stuff correctly and fair, the main reason I’m angry is the pain those people go through. 1 cent per garment??? Sewing, crocheting, knitting is hard and i could never make sth for 1 cent unless it’s something tiny with normal worsted wool like the first row of a granny square or a small heart…
But also o hate myself because i ordered from shein multiple times and i wear those 3 shirts sooo much
They were made extremely well for such underpayment. Those people are doing their best and a lot of customers and people in general just shit on their head and products cuz it’s from shein or whatever.
I’ve seen so many youtubers buying stuff from shein and “testing” it and “reviewing” it. They buy something, say it’s shit and that they don’t like it and “donate” it… yea sure they throw it or sell it for more.
Not a lot of those youtubers mention this stuff.
I hate this. You guys wanna punch some people from shein?? =))) those who pay the workers or idk whoever is in charge and does this willingly

I wrote a dam essay

It makes me so sad cause I injured myself crocheting too much, and to think that workers are paid cents to make an item and can’t take breaks. You have to think that beyond that, they have to come home and do domestic work all evening and they barely ever rest. I think of the pain I’m in when my health issues flare up and I don’t even want to imagine what it’s like to never be able to stop. Honestly, the people who do that must crochet so much that they’d be more experienced than most of us and given the proper platform, and fair prices they’d probably make much more more money in a month than they’re paid all year…

The sad thing too is if they hurt their hands making all those garments for shein, they won’t get workers compensation and they have hands that don’t work.