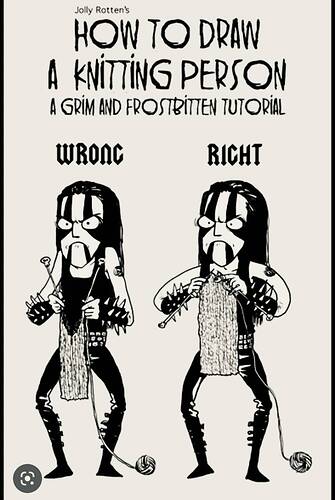 Ha! Thanks for sharing I couldn’t get that one saved to my phone, but I absolutely love it!
(It may also go with some of my morbid and dark humor

The reason we see so many depictions of needles pointed downwards is because of parlour knitting, fancy ladies would learn to knit a certain way in public, typically when entertaining a guest in the parlour, where the needle rests over the hand instead of under the fingers as it made the hands appear more dainty and delicate.

Parlour knitting does not point down either, that keeps the needles horizontal.
The real reason is because the artists do not take the time to look it up. They see two sticks and string and draw the nearest mental picture they have:
using chopsticks with noodles.

The most egregious depiction would have to go to quilted northern toilet paper.
Back in the 90s they had an animated TV ad of a quilting circle that was doing their quilting by stabbing the quilt with knitting needles. I can’t be the only one to complain because they replaced it with a new ad showing sewing needles and the ladies had their knitting needles in their hair.

Wow! Maybe they did it stupid that way on purpose or they were really THAT stupid.