Added my froglet pattern to ribblr and have made it a free pattern.
I originally listed via etsy to raise money for froglife originally and now thay has come to an end I am releasing for everyone to enjoy if they please.
I’d love to see your creations if you make one yourself 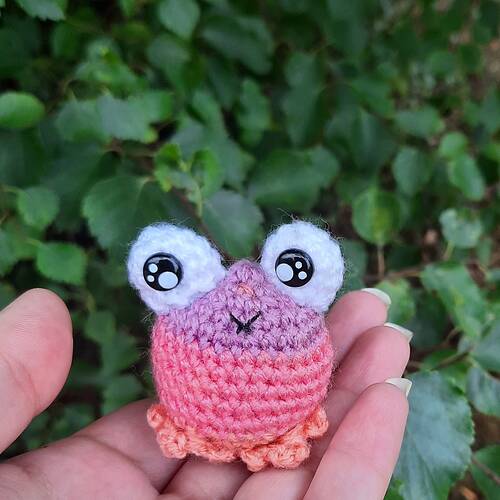 Cute! Are the eyes buttons, or…?

Oh ok. I’m not sure I’ve seen that style, but I don’t do much amigurumi it seems, haha. And the ones I did do either came in a kit with plain black eyes, or I crocheted the eyes.

These are safety eyes bought from amazon but I don’t recommend from there as the backs don’t fit so had to source others separately.
They are super cute though so a better seller will have them with backs that fit

I had felted most my froglets initially and only used here because its smaller.

I’ve seen them on Amazon, i think

I read on a blog to put the defunct washer or even the good one on the toy. Then take a lighter with a small flames and melt the “bolt” of the eye. Smash it flat with whatever.
I’ve tested it and it works! !

Oh, does that make the pointy end flat?

I try not to burn too many things cause I’m clumsy enough that it’ll go wrong at some point haha, I glue mine on for extra security. I’ve used acylic glue, uhu and hot glue and the last 2 are best due to dry time

I’ve seen many suggest burning the backs and pressing flat with the lighter and it looks good and secure, I’m just a cluts

Same here. I was going to comment how dangerous that might be, yarn and all haha, but some might not find it that way. Me, on the other hand, I’d probably do something and burn down the whole house​

I melt my yarn ends because you don’t have to put it into the fire just near the heat but the backs scare me because its inside my project.
The plastic used is a low density plastic so is safe for melting this waybwithout releasing toxic fumes at least. That was my other worry when I first saw it but looked up the plastics to double check.