Hey, how do English speakers call this thing?

I’m working on order, so I wanted to make pattern to use it later. But I can’t find how to call it in English 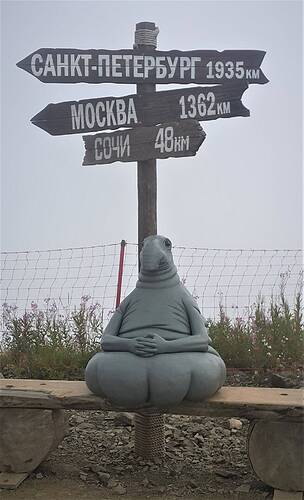 If it’s the statue I believe Zhdun, but I could be wrong

The other thing standing up is a signpost.

that thing is nightmare fuel sitting in front of a signpost
it looks like an elephant seal with arms which is creepy
“Homunculus Loxodontus is a statue by Dutch artist Margriet van Breevoort. It was made for the Leiden University Medical Center and installed in the spring of 2016.”

I agree, it’s creepy looking. The hands , ACK!, the hands.

I always thought it was some doctor who character or sm

Yeah, that Russian name. But I believed that this meme was used in English internet but I guess it’s not

thats exactly what i thought!

“nicknamed Zhdun, “The One Who Waits”, Snorp, or WOSH”
From wiki he seems to have a couple of names.

Thanks! I saw waitling variation, but wasn’t sure it’s used.