I’m currently trying to learn mosaic crochet to expand my skills and eventually maybe design a few things I have in mind! So I watched a bunch of tutorials but I’m autistic and most of the time they go too fast on little things I need clarification about. Like they’ll briefly mention oh, that stitch goes in back loop and then other stitch in other loop but then never say it again the rest of the video and then I’m not sure where the thing goes.

So what are your favorite tutorials to learn mosaic crochet? Also if anyone knows of any written (and picture) tutorials that’d be great! I do better with those cause I can take my time to understand each step.

I have to go make lunch, so I will be back on here later for a long answer

I’ll have to ask them their policy about ordering books in english, we have a bunch of stupid legislations that prevent english things from happening in Quebec but idk how it works in public libraries XD

I’m in some mosaic crochet groups on Facebook. I’d have to go look up their names but they all sell patterns online and I’ve bought a bunch of them but have yet to find time to make one of them. Beautiful patterns though

ok, despite what my shop would imply, I really don’t crochet much. I was doing some research while cooking to make sure I understood the difference before I said anything.
(southern chicken bbq pizza, because I know you were wondering)
anyway
this will all be in english terms, because that is what I know
mosaic crochet is really just working the same row twice. Once in color A then in color B, unless you use method 3 (I’ll get to that later)

control example, you crochet a row of dc in every stitch across, turn
work another row of dc in every stitch across. Both loops, normal crochet.
in mosaic crochet, you want another color in your design, but not the bulk of tapestry work. So you work stitches in such a way that you can put some stitches on the back burner and highlight other stitches, then do the opposite for another color on the next row.

I’m going to use blue and red because it’s shorter than color A and colorB
You want to make a checkerboard of red and blue in
method1) you 3dc in red, chain3 and skip 3sts, dc in next 3 dc…repeat across the row to make spaces and squares. Drop red, go back to the start of the row and pick up blue. Where there is a dc, you will slip stitch and where there is a space, you will dc in the previously skipped stitches all the way to the end, then turn your work and repeat the process on the next row. It helps to think of each row as two stages . Row1.1 then 1.2 or row 1a, 1b
this is the least confusing method

method3) is the most confusing for me and involves making front post stitches over the colors you want to hide. I do have a pattern coming out that uses this method, but it was very very difficult for me to write and I still cant really spell it out for you here and now. other than to say that it takes many rows for the image to come through this way because of the back-tracking done to previous rows to make the pattern.
here is the example 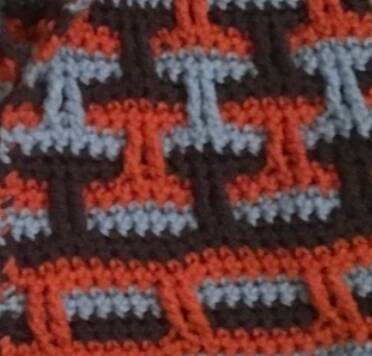 And thanks that helps me understand a lot more!

I’ve used a similar technique to method 3 for a test actually. It used FP over the last rows like that. It looks really nice I like that!

oh, I forgot, in method 2
next row will have front stitches and back stitches, so double cloth held together where ever the colors cross over. so if you made a white square with a red heart, the other side would be a red square with a white heart, In knitting, it’s called double or jacquard knitting

Oh! Yes I saw pictures of that!

Been dying to make the Peacock Delight blanket. I have all the yarn for it. The instructions seem simple enough. But I know I’ll get bored of reading the pattern and want to jump to the diagram right away loll

@Winternightmare Have you tried looking for the search term mosaic in Ribblr?

It seems like you could easily just convert a tapestry pattern to mosaic. Maybe start with something simple and small until you get the groove of the technique down

Thanks, I found a few nice tutorials since then and I think I got it down now! I have a few tests to complete after that my next project is trying mosaic, and I’ll share the results on Ribblr <3

I got started and so far so good! 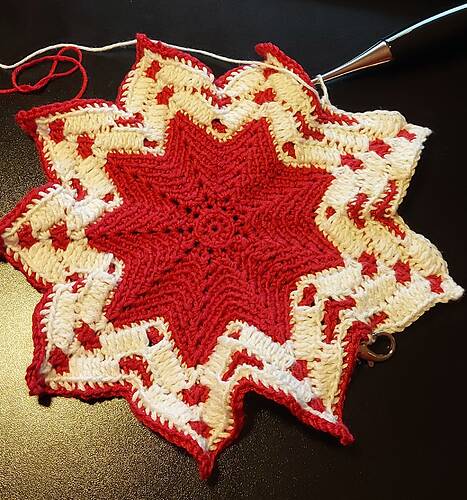