Some advice about patterns and shop

Sooo I just wanted to ask before I accidentally do something that’s not nice.

I recently saw a few cool boba cup patterns that seemed very adorable, and then I thought about making my own boba cup pattern, but would it be okay to put that in shop?

i think that If the pattern was created by you its ok to put It in your shop. that “Idea” area is tricky cause If you stop to think about it everything that we make we saw somewhere before. you wont be copying someone else’s Idea. An example of that: you can think about an animal for example and search for it here on ribblr: youll find a lot of different patterns of bees for ex!

, that makes sense, I didn’t even realize for a bit the axolotl one’s also is a pattern that’s pretty common, I guess the only difference between that and the other pattern is like:

with axolotl I just really wanted axolotl and went to design one on paper then figure out rows and that stuff and make a whole pattern, while the other thing really was that I saw one of those and thought that would be really cool to make, then just tried some things and wrote it down until I liked it

I think if it’s exactly like it it might be a problem, personally if you can’t make it different enough I would hesitate.

It’s not like exactly like it, the top part is different, different sizes (like one is big and mine is tiny keychain size), details at bottom are different, but a cup is still a cup so the main body is still a tube shape like the one I saw earlier

So I think it might be different enough as a pattern, I’m not sure how they made theirs because I haven’t really seen anything of the pattern apart from cover images

But thanks for the feedback, definitely if it looked exactly the same I wouldn’t feel comfortable selling it at all, but even though it looks different I still had some struggles because I don’t feel like it’s my original idea, like specific pattern wise it’s my idea but topic/object wise it’s not my original idea

Sorry for all the long messages btw, it’s a bit of a bad habit to type lots

This is the pattern I made: 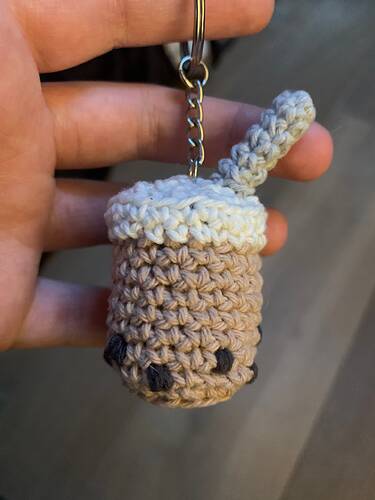 For sure! A lot of people take inspo from what’s popular or just cute patterns they’ve seen! Maybe try adding your own unique touches on it like making the bobas hearts or just a small detail to be a little different <3

You should totally sell it yourself. Inspiration is unavoidable, and as long it’s not a direct copy of the pattern you’re good! (btw I love the boba one you made.

Thanks for all the replies, it’s really nice to hear what lots of people think about it