What To Do With Your Yarn Scraps

Hi everyone!
I have a very good friend who had given me advice on what to do with your yarn scraps instead of just throwing them in the trash. She said to separate the yarn strands and put them in a bag to wait for Spring to come, and then put them all in a pile under a tree in your yard. She said it also works with hair, like when you empty out a brush, if you get my gist. She knows this because she used to have a dog that shed like crazy and it was under 1 tree, and the birds used them in their nests! I tried it but only with a little bit of green yarn, maybe the birds didn’t see them? Or maybe it just happens in her yard not mine? Anyways I’m planning to give her the bags and bags full of yarn scraps I did this to in the spring and put them under a tree in her yard and see what happens

If you live in a place with lots of trees and birds I would suggest doing this!

Thats reslly cool i wanna try that I do usually throw them away or save them to stuff amigurumi with!!

OMG I’m doing this!!! Is it ok to use acrylic yarn?

Yes! Any yarn I believe!

Warning: The National Audubon Society says Do Not Do this for the birds’ safety. 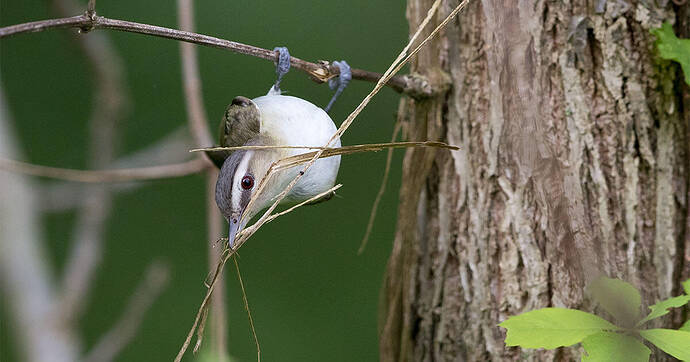 What Nesting Materials Are Safe for Birds?

Follow these dos and don'ts if you want to help your feathered neighbors build their homes this spring.

" Human hair: According to Gordon, human hair is a triple threat for birds: It’s long, thin, and strong. These characteristics can be a deadly combination, allowing the hair to easily ensnare a bird’s leg or wing and sever it. “You can wrap [hair] around your finger and cut your circulation off,” she says.

Yarn or string: Long strands of yarn and string can wrap around a bird. Hatchlings are particularly susceptible to such entanglements, Gordon says. Yarn in a nest can get caught around a baby bird and cut off circulation as it grows."

Ok! Thank you so much! I don’t want to hurt the birds, so I won’t be putting yarn out! But if you want to use up those scraps, use them as stuffing!

Oh my! I didn’t know this, thank you!!! I’ll probably use it for stuffing instead : )

I use mine to stuff animals

I save my bits of yarn for stuffing items I make. I’m paranoid about my yarn ends, especially if they’re not 100% wool. I wouldn’t want my cats to eat them because they can block cats tiny intestines and don’t show up on an x-ray so they would need an operation, which I don’t want to happen! At least if it’s 100% wool and they eat a tiny end it would just be a big hairball!!!

wow! i’ll give it a go. i hate to throw away yarn and since it’s almost spring (where i live), i could do this. your friend is very creative @NoKittenAroundStudio

Please don’t! @Karametra looked into it and it can choke the birds! Use it as stuffing instead!!! I know @NoKittenAroundStudio meant no harm because it does sound like a great idea but the yarn could harm hatchlings